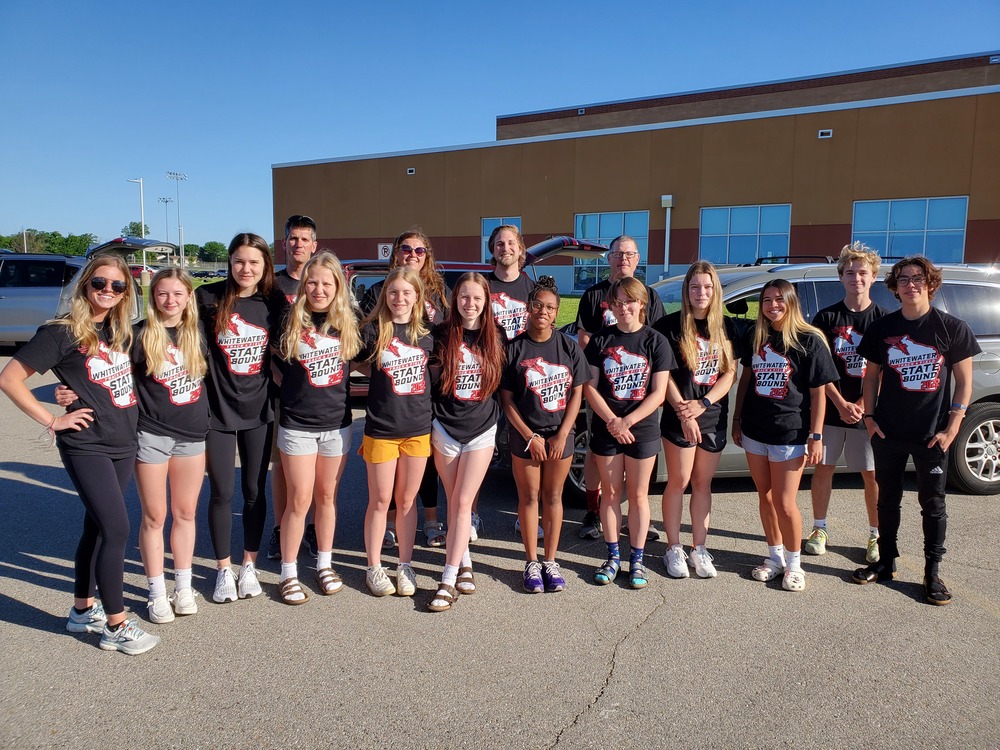 On Saturday, June 4, the Whippets competed in Day 2 of the WIAA State Track and Field Championships in La Crosse, WI. The team had several competitors who had qualified for Saturday’s events during the preliminary rounds on Friday, as well as other athletes competing in distance and field events. Day two proved to be a day to remember for the Whippets, despite the weather changing significantly from day one, which was full of sun and temps in the 70’s, to overcast skies, cooler temps, headwinds on the home stretch, and rain falling intermittently throughout the day. Maddie Buehler was up first for the Whippets as she coiled into her blocks for the last time in the 100-Meter Dash Final. She got off to a great start and looked strong throughout in the toughest field she has faced in her career yet. She finished in 10th overall in a time of 12.94 seconds with a gritty effort. It was a great season for Maddie in this individual event, as she got to rub elbows with state finalists for the first time during the State Final. Her Sectional time of 12.41 pulled her to within .06 of the school record, good for #2 all-time in Whitewater history. Maddie’s accomplishments in the individual sprint events during the 2022 season are a lot to be proud of! Next up was the Girls’ 4x200 Meter Relay Final, running out of lane three on the ten-lane track. The team qualified for the final by running within the top 10 teams on Friday. Maddie Buehler returned for her second race of the day, getting into the blocks to lead off the relay. She shot out of the blocks and ran a strong leadoff leg and made a clean exchange to fellow Whippet Emma Weigel. Emma came screaming down the home stretch in front of the roaring crowd of a full grandstand and got the baton to Olive Coburn early in the zone. This quick exchange saw Olive press on the gas, and she gave it her all during her last race in a Whippet uniform. Olive finished her leg of the relay strong and passed the stick to a patiently waiting Kindyl Kilar. Another smooth exchange from Olive to our anchor, and Kindyl was off like a rocket with one goal in mind: bringing home a medal. With the entire fanbase of Wisconsin Track & Field cheering the relays on down the home stretch, Kindyl brought it home and crossed the finish line in 6th place, claiming the final podium position! Their time of 1:47.00 was a hair off their best time of the season from the prelims, but at this point, it didn’t matter as their smiles on the podium said it all! With the rainy weather conditions unsafe for vaulting outdoors, the Girls’ Division 2 Pole Vault was moved inside Mitchell Hall where Evie Troxel competed in her first ever State meet. Surrounded by her family members, teammates, and coaches, Evie used her home crowd advantage of the cheering fans to sail cleanly through the opening height of 9’ 0”. The next height of 9’ 6” was her previous goal entering the 2022 season, but as she crushed that height at sectionals, she proved that 9’ 6” is no longer a challenge for her! At State she showed that same demeanor and cleared 9’ 6” on her first attempt. With several other competitors remaining in the competition, the bar was raised 6 more inches to 10’ a height that Evie had several attempts at last week at the Sectional meet. Of her three attempts at that height, Evie had two that were very close to clearing and setting a new personal best on the biggest stage. With her ability to stay clean through the first two heights, she finished tied for 9th place and a smile a mile wide that is trademark Evie! The final event for the Whippets was freshman Jack Hefty in the 3200-meter run. Jack had been waiting nearly two full days of competition for his event as the gun went off at 4:15 pm on Saturday. In what were the best conditions for a distance event in years, Jack ran the most thrilling race one could imagine. The race strung out early as both the winner and runner-up would eventually break the state record in this event. He started out in 15th place at 400 meters as he knew the pace would be brisk. He stayed true to himself, controlling what he could control and made his way to 13th in two laps, 11th in three laps and 9th coming through the 1600 in 4:47.12. Jack stayed locked in on his pacing as the pack he was with chased down other runners in front of them. On the penultimate lap he pressed on the accelerator and ran a 70 second lap, and from there it was all guts as he went into overdrive and passed four runners on this final lap to come screaming home in 7th place overall and closed in 63.1 seconds! Jack cut just over 20 seconds off his previous personal best from Sectionals, nearly breaking the school record held by Ben Maas from 1996. Jack’s time catapulted him into the #3 spot all-time in the Whitewater Track and Field record books in the two-mile. His 7th place finish in 9:27.23 was one place away from the podium and scored the Whippets two points for the weekend. It was a stunning effort, and an incredible end to a stupendous freshman season for Hefty! This concludes the 2022 Track and Field Season! It was the first “normal” season for nearly the entire program, as the team was able to resume a typical schedule full of invitationals and a two-day state meet for the first time in three years. The coaches would like to thank all the athletes, parents, fans, staff, and the Whitewater community that have supported the team through this season. We will celebrate all the athletes on Monday during our end-of-season banquet as we close the chapter on a fine season!