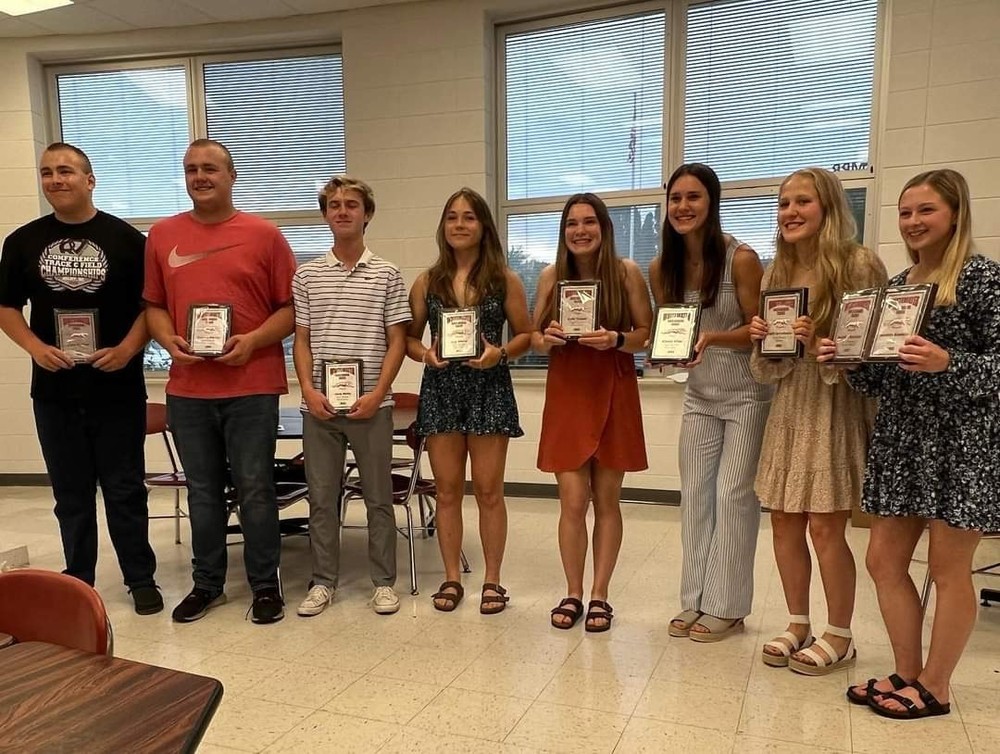 On Monday, June 6, the Track and Field Team held their annual end-of-season banquet. With families in attendance, all Whippet athletes were spoken about by their coaches, who said a few words about each athlete’s progress, accomplishments, and of course the laughs! It was a night of celebration for the 2022 season.

Several athletes were recognized individually for their achievements. Four awards were given to a total of 9 athletes. Those awards and winners were:

The Up & Coming Athlete Award was given to a first-year track athlete who demonstrated great potential, and who the coaching staff believes will be essential to the team’s future success. The Most Improved Award was given to those who demonstrated great improvement from the 2021 to the 2022 season. Finally, the Track and Field MVP Awards were presented to athletes who demonstrated the highest level of success on the track and in the field events, including varsity point scoring and top finishes at invitationals, Conference, and State Series Meets. Congratulations to each of our award winners!

In addition, special recognition was given to those athletes who notched a Top-10 all-time mark in Whitewater Track & Field history. The links below will take you to our updated Top-10 list. Alumni - you may find that your marks have moved down a spot after this season!

The athletes achieving performances on the Top-10 list in 2022 were:

Jack Hefty - Hefty, a freshman, first made his mark on the Top-10 list at the Sectional meet in the 3200-meter run. His State-qualifying time of 9:47.92 moved him into the #7 spot. But that wasn’t enough for Jack. At the State meet he improved his time significantly, running in a race that saw both the winner and 2nd place finisher break the now-previous State Record in the event. His time of 9:27.23 was good for 7th place at State, and moved him into the #3 spot all-time. In the last 25 years across all divisions, only four freshmen have run a faster 3200 at the State meet than Jack. The current school record is held by Ben Maas, who in 1996 ran 9:25.1. Congratulations, Jack!

Evie Troxel - Troxel, a junior, also made an impression on our Top-10 list at the Sectional meet, where she pole vaulted a new personal best of 9’ 9”. Our lone field event Top-10 entry of the season, Evie cleared 9’ 6'' cleanly at the State meet to tie for 9th. Evie’s Sectional mark of 9’ 9” literally vaulted her into 8th place on the Whippet Top-10 list, where she is tied with Alison Matthews’ 2012 mark of the same height. The school record holder in the event is Kim Stonewerth, who leaped 11’ 8” in 2011. Congratulations, Evie!

Maddie Buehler - Buehler, a junior, was also a three-event State Qualifier in 2022. Maddie added her name to the Whitewater Track Top-10 list in that same number of events in 2022. She was a member of both the 4x100m and 4x200m relay teams that are now ranked 7th and 6th, respectively, on the all-time lists. Individually, Maddie blazed the track at Sectionals against some fierce competition, and in the 100-meter dash she recorded an astounding time of 12.41. The time moved her into the #2 spot on the all-time list, our highest Top-10 mark of the season. She was also a State Finalist in the event. The school record holder in the 100-meter dash is Kailey Reynolds, who ran a time of 12.35 in 2015. Congratulations, Maddie!

Olive Coburn - Coburn, the only senior in this group of Top-10 athletes, made her mark on the record books in the 4x100m and 4x200m relays, joining Kilar and Buehler. The 4x100m relay’s time of 50.78 placed them #7 on the all-time list, tied with a quartet of Keri McLean, Rachel Travis, Emily Haberman, and Ellen Nosek, who in 1999 ran the same time. The school record is held by Courtney Payne, Kateley Haberman, Courtney Nelson, and Zia Okocha, who in 2004 ran a time of 50.30. Congratulations, Olive!

Emma Weigel - Weigel, a junior, was the final Top-10 member of the tremendous 2022 short sprints crew. Weigel joined Kilar, Buehler, and Coburn as the fourth member of both the 4x100m and 4x200m relay teams that made their mark on the all-time lists in spots #7 and #6. The 4x200m relay team’s time of 1:46.74, ran at the State meet's preliminary round, was the 6th fastest time in Whitewater’s history. Serendipitously, the 4x200m relay team placed 6th in the State Finals the next day, capturing the final spot on the podium. The school record in the 4x200m relay was set in 1986 by Tina Partoll, Janet Partoll, Julie Paynter, and Samantha Reeb. Those names are perhaps the most recognizable across the WHS Girl’s Top-10 list, populating a total of 15 Top-10 spots between them in sprints, relays, hurdles, and jumps. The 1986 Whippets’ school record time of 1:43.93 stood as the Division 2 State Record for 24 years until 2010. Congratulations, Emma!

Congratulations again to our award winners, Top-10 listers, and all Track & Field athletes on a phenomenal 2022 season! I (Coach Green) would like to especially thank our seniors for their hard work for four years, all parents and community members for their support of the program, and the coaching staff for their dedication to excellence and their assistance in building both the athletic success and character of each of our athletes. See you in 2023!